As an honorary member of the Scientific and Cultural Committee of the Chinese Science Writers Association, Mr. Ye Yonglie has completed works of 10 million words in such fields as science fiction, scientific fairy tales, science sketches, scientist biographies and science education film scripts, and he is one of the main authors of the first edition of Mr.Know all. Ye Yonglie’s scientific sketches and scientific essays are simple and clear, and are vivid in contents. He has published such selections of scientific essays as After Burning and The flower of Knowledge, and his After One Hundred Question Marks, To Be a Horse First and Human Studies and Science Studies, etc. have been included in the national language textbooks. In addition to scientific sketches, Ye Yonglie’s scientific fairy tales are also unique. In 1976, Ye Yonglie created China’s first science fiction Oil Protein after the Cultural Revolution. In 1978, Ye Yonglie brought a shock to the science and art field in the new era with his long science fiction Xiaolingtong Roaming the Future. This book became popular immediately after its publication and the total printing volume exceeded 300 million, which helped Ye Yonglie become the spokesman for Chinese science fiction. In 1979, his biographical literary work Grandpa Gao Shiqi was published, which opened the door to biographical literature for him. Ye Yonglie’s interest in biographical literature has continued until this day, and his latest science and literature biography was Approach Qian Xuesen, which was published in 2009. As the director of the Shanghai Science and Education Film Studio, Ye Yonglie also created many important science and education films. In 1980, he filmed Under the Traffic Lights, which won the 3rd China Film Hundred Flowers Award. Not only was Ye Yonglie engaged in writings, he was also an organizer, promoter and theoretical explorer of the Chinese scientific literature field. As early as in the early 1980s when he served as the vice chairman of the Science and Literature committee, CSWA, he edited Materials for Science Fiction Writing, which was of important reference values for writers’ writings. On scientific literature, which was adapted according to his speeches during his lecturing tour across China teaching young science writers to write, is still an academic writing that occupies an important place in this field. The reportage work Rights and Wrongs of Cinderella, which recorded using detailed documents the whole process of how the Chinese science fiction literature flourished and declined after the crush of the Gang of Four, is an important reference for research on this field. Ye Yonglie’s scientific and biographical literature writings have received many awards, including the China Movie Award, China TV Golden Eagle Award, China’s top 10 Biographical Literary Writers, the Golden Dragon Award for Chinese Literary Artists and the Best Biographical Literature Award, etc. In view of Ye Yonglie’s outstanding contributions to the field of scientific literature, the China Association for Science and Technology and the Ministry of Culture jointly held a ceremony in Beijing to grant Ye Yonglie the title of Advanced Science Worker. 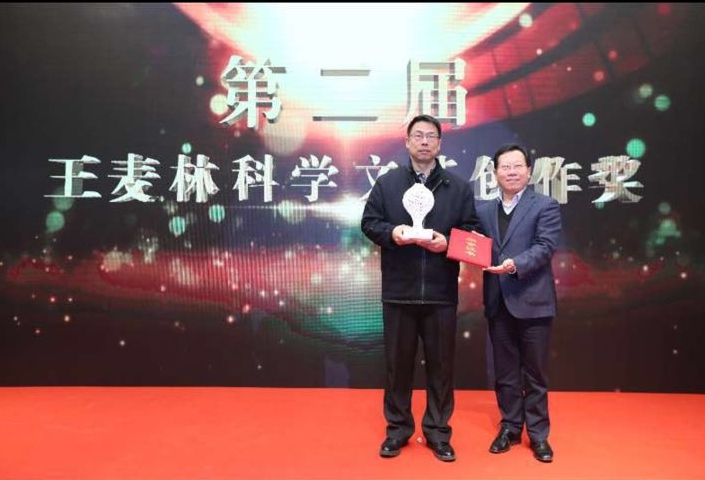 Zhou Lijun (right), Vice Chairman of the Chinese Science Writers Association, granted the award, and Yin Chuanhong (left), a science writer, came to the stage to receive the award on behalf of Mr. Ye Yonglie