Robert J. Sawyer: China May Be the Next World Science Fiction Center 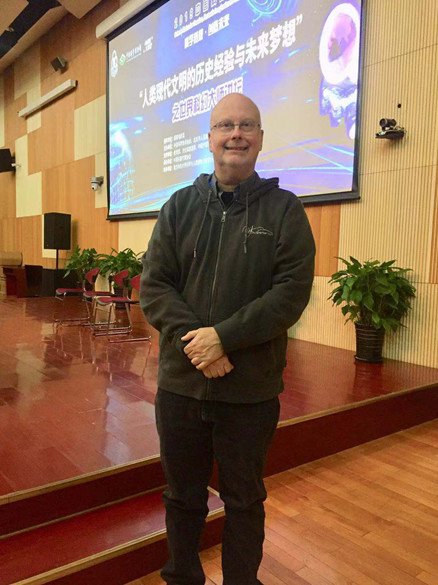 Journalist: You have been to China for many times, Mr. Sawyer. What changes do you think China has undergone, especially in the field of science fiction？

Sawyer: I came to China for the first time 12 years ago, that is, in 2007. From that time to now, China’s science fiction has undergone tremendous changes indeed. In 2007, science fiction novels are still on the edge, so to speak. During the next few years, the Chinese government realized that science fiction novels have important values and that they can encourage young people to devote themselves to technological development in the future. China hopes to lead the world in science and technology in the 21st century, and I think that this is highly possible.

When I came to China for the first time, most young people preferred to choose international relations or business studies; however, a country needs scientists, engineers researchers and technicians, etc. more urgently. At that time, I could feel the tension between the government and the science fiction community. This was because in each country on many occasions, not just China, science fiction novels can only discuss what the rulers want people to, such as alien planets, distant future or some different forms of lives, etc. However, science fiction novels are beyond that. They have many other dimensions, such as stimulating people’s interests in science, energy and engineering. Therefore, the government began to weigh, thinking that although some concepts are somewhat radical in science fiction novels, they are of great benefit to the development of the country and can help stimulate people to engage in the field of STEM, namely science, technology, engineering and mathematics. So science fiction novels have undergone great changes in China, and are moving from an isolated and marginal zone to the center of government policies and people’s lives. It is also very likely that China will become the next world science fiction center.

Journalist: What roles do you think the government plays in the cultivation of the science fiction culture?

Sawyer: Very important roles. Just like now, my counterparts from these Western countries and I have the opportunity to attend this science fiction convention held by the China Association for Science and Technology exactly because of the Chinese government’s funding. It is without doubt that science fiction has become an important part of the public life. I don’t think that we would have such an opportunity 20 or 30 years ago. Therefore, the role of the government should be admitted. In addition, I know that Chengdu has now been named “China’s science fiction capital” by the Chinese government. This is the honor of a city, and I think that Chengdu deserves it. 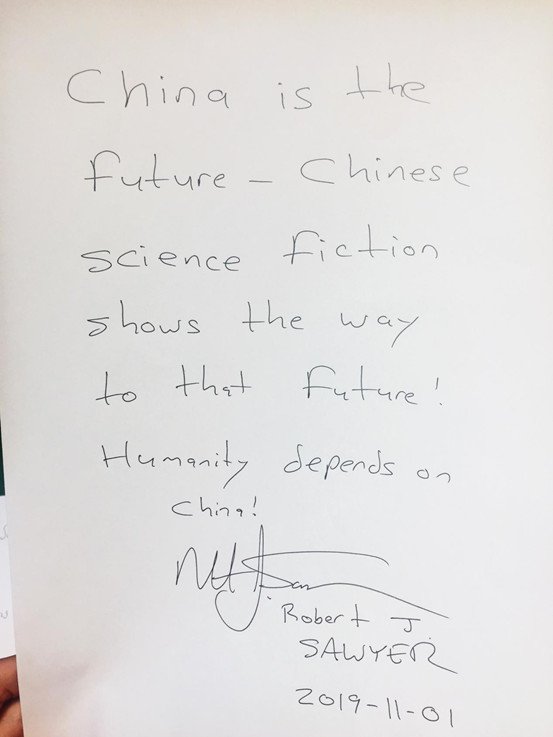 Sawyer writes down his blessings for China’s science fiction

U.S. science fiction is heading for a recession.

Journalist: What is your perspective on the development of today’s U.S. science fiction?

Sawyer: When talking about science fiction, we have to mention the development of technologies and people’s attitudes towards them. Today, China is leading the world in science and technology, while in the second half of the 20th century, U.S. technologies led the world. Now, the U.S. science and culture are heading for a rapid recession, but it is more focused on perceptual culture instead. When making decisions, the government relies on people’s emotional bias instead of factual evidence. Such a phenomenon sends the development of U.S. and even the U.S. science fiction novels into a recession gradually.

In today’s U.S., fantasy novels are more popular than science fiction novels. Fantasy novels describe what can never be realized, unlike science fiction novels, which describe what might happen. In the meantime, post-doomsday novels and dystopian novels are very popular in the U.S. Nowadays, young Americans have begun to feel that they are not living a life as good as that of their parents, while young Chinese people feel that they are living better than their parents. China is moving forward, while the U.S. is recessing. The post-doomsday novels believe that the status of U.S. as the world leader has gone forever, and that their country, their lives and all humans will perish.

Journalist: What do you think has caused this?

Sawyer: The U.S. did a very famous attempt 100 years ago. The American teachers began to try to teach the theory of evolution in public schools. Later in the 20th century, almost the entire world was learning the theory of evolution. It has now become the foundation of modern biology, and it seems that people have a paranoia about technologies. But now, Americans will ask: Wasn’t the U.S. better 50 years ago? People are dissatisfied with the current life obviously. But in China, no one will ask: Wasn’t China better 50 years ago? Most people will say that the society is better now than it was 5 years ago, and was better 5 years ago than 10 years ago and 10 years ago than 15 years ago. China is progressing rapidly. Everyone will say that China’s industry, air purification and power equipment in rural areas now make people’s lives more convenient. In the current culture of China, people embrace science and culture. While in the U.S., it seems that people pay less attention to science, and it is without doubt that science fiction novels will be ignored in such a society in which science is not valued. 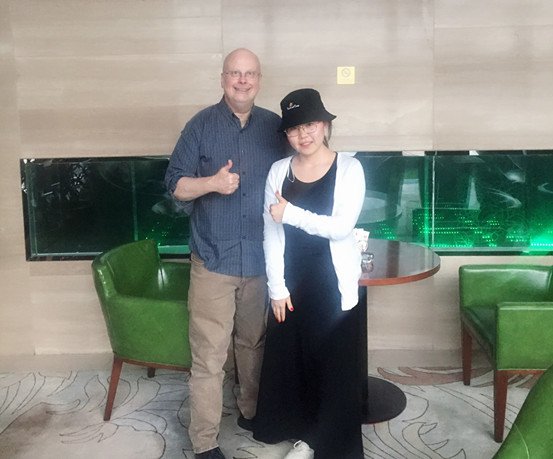 Sawyer and the interviewer were posing for a photo.

In Canada, it is easier to be a happy full-time science fiction writer.

Journalist: Could you talk about the status quo of Canada’s science fiction, please?

Journalist: What do you think makes Canada the fertile ground for science fiction novels?

Sawyer: I think there are two reasons for this. Firstly, Canada is a country that supports science, but the U.S. is not at all, especially during the Trump’s administration. Canada’s Prime Minister Trudeau is supportive of the development of science and technology very much. Our government develops policies on the basis of scientific evidence instead of public sentiment. Secondly, we have sound medical insurance systems. Canadian citizens can have access to free medical treatment as long as they have medical insurance, so I have been a full-time writer since 23 years old. Now I am 59 years old, and I don’t need to find another job. But the scenario is different in the U.S. Some of my American counterparts must have full-time jobs if they want to enjoy medical insurance. If they don’t have jobs, no one will pay for their medical care. The medical insurance is paid by companies in the U.S. So they have very little time on writing every week, while I have a lot of time. Therefore, our Canadian counterparts can become modestly famous writers in their 20s or 30s, while American writers can become famous only when they are 40 or 50 years old, and they need enough time to complete the same number of words. This is the advantage of Canada. People tend to be the most creative and have the opportunity to become full-time writers when they are young, so this makes it possible that Canada has a great influence in the science fiction community in the world, such as Kelly Robsom from Toronto, who is an excellent female science fiction writer. 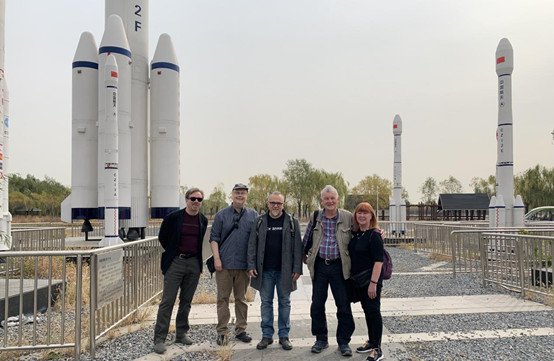 Sawyer and his Western counterparts attended the China Science Fiction Convention. They were posing for a photo in the Beijing Garden Expo during the convention.

Prior to the interview with Mr. Sawyer, the interviewer Chen Yue toured the Beijing Garden Expo with Mr. Sawyer and several world science fiction masters, such as Francesco Verso and KenKen McLeod. During the tour in the Expo, Sawyer said, “I have been to Beijing for many times previously, but my feelings are different across the visits. The air in Beijing is actually getting better every year. When I came here in the past, it was dusty everywhere. Now the sky is already very blue, and this means that the Chinese government is working very hard on the air indeed.” He also spoke highly of the development of China: “Now electric vehicles are everywhere in China. The Chinese government attaches great importance to energy conservation and environmental protection, which is unimaginable for other countries.”